Drive north up the highway from Penola and keep your eyes peeled left and eventually you will spot a small homestead outside which lies a rather incongruous signpost pointing towards multifarious destinations around the world. Napa Valley: 13,270km. Bordeaux 17,045km. Rioja Alta 17,545km. Apart from instilling a sense of complete isolation, the signpost is there to signify that you are at Highbank, one of Coonawarra’s artisan wineries established by Dennis and Bonnie Vice (as well as a neat little cottage to rest your weary head travelling between Adelaide and Melbourne.) By Neale Martin

This is a small operation in every way: indeed my tasting of Dennis’s wines took place in a little annexe off his kitchen. 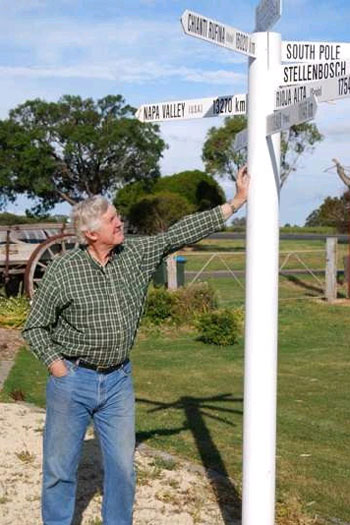 Born in California, he holidayed in Coonawarra in 1985 and liked it so much that he emigrated there and worked for the National Association of Sustainable Agriculture Australia (NASAA) for 12 years where he oversaw organic field certifications…. Dennis explains: “We had the great opportunity to attend several wine and matching food seminars put on by the great wine makers of California e.g. Robert Mondovi, Michael Grgich and many many more and when traveling with the old PAN AM airlines, Coonawarra wines were introduced to us by a very dear friend on a trip back to San Francisco. The region was a destination for serious wine enthusiasts and were really not internationally known until Greg Clayfield of now Zema Estate won the International Winemaker of the Year’ award of ‘Wine Spectator’. We got in before the rush. My wife and I always said as a goal…post-Chernobyl …that if we made a wine it must be so good that if we can’t sell it we would love to just drink it ourselves.”

“Viticulture and winemaking are not as demanding as other agricultural pursuits. Take cattle or other livestock, 24 hours a day 7 days a week. Having immigrated to Australia from Hawaii and California, now some 25 years ago, my wife and I always had a goal to spend the winters in the other hemisphere. My wife is Hawaiian…get the pruning done and go! Guess where she is right now…and me here pruning in the vineyard! So not everything has totally worked out.”

Of course, being so small means that they pay attention to detail: hand pruning, fruit-thinning and hand-harvesting, all those practices that I assumed never existed in the mechanized region. “Our family vineyard is a small vineyard by plan. We both wanted to enjoy the life style and keep the work load reasonable. It was originally planted proportionally to the varieties on our back label. If in years where God and nature are more generous to us, we select fruit for a Family Reserve Cabernet or Merlot.”

“When we first planted (10- now 15-acres) we knew the style of wine we wanted to achieve and were very aware of the importance of matching the soil type and variety with original plantings based on extensive soil profiling of this beautiful ‘Terra Rossa’. Plantings were originally 65% Cabernet Sauvignon (6 clones), 25% Merlot (2 clones) and 10% Cabernet Franc. Replants on rootstocks now represent 10% of the same varieties. All clones were selected against the trend at the time, only low to moderate yielding with selection based on actual tasting of wines made from different source vineyard block from around the world, e.g. Europe, California, South America and Australia. A very good Canadian friend was in charge of vine improvement in South Australia and my teaching the industry about wine growing really helped with industry connections!”

“Grape consistency every year is maintained with varietal block sizes being generally small with the view to creating small batches of individually expressive and uniform fruit. Green pruning controls yields per vine. They think we are crazy! Meticulous hand pruning to specific pre-determined bud numbers, shoot-thinning and extensive canopy management: Scott Henry and 2 wire vertical. We target along with use of natural fertilizer (organic fertilizer) when needed by analysis and no chemical herbicides or insecticides have ever been used.”

Researching the background to Highbank, I found that Dennis was helped by Trevor Mast overseeing the winemaking… “Trevor and I shared the same basic philosophy of wine making: traditional with as little intervention
as possible. Trevor has Alzheimer’s and is unfortunately not working with us any more. We used a small basket press to control pressure on grape bunches and open fermenters to control the heat of fermentation. There is no fining or filtration. We emphasized making the wines in the vineyard as we did not have all the wiz bang equipment used today.

”The wines of Highbank have already received praise from some bloke by the name of Robert Parker and I would concur: these are high quality Coonawarra wines fashioned in a way that has more parallels with the Old World than new. I was particularly impressed by the Highbank Coonawarra 2002, which after bottle ageing is showing great complexity, fine tannins and a certain “coolness” or “nonchalance” that is very attractive. Production is of course limited, but these are well worth seeking out.