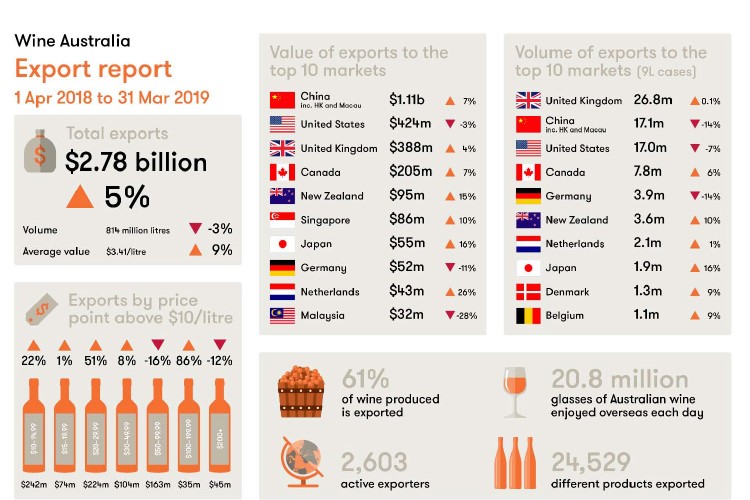 The total value of Australian wine exports increased by 5 per cent to $2.78 billion in the 12 months to March 2019, with the average value per litre climbing to $3.41, the highest level since 2009.

Wine Australia Chief Executive Officer Andreas Clark said that the continued growth in the value of exports was an extremely positive trend for the sector.

Mr Clark said that while the volume of exports had declined slightly by 3 per cent to 814 million litres (90 million 9-litre case equivalents), the increasing value overall and on average was overwhelmingly positive. ‘What we are seeing is a drop in volumes in the lower value categories and this places Australia well as the global consumer premiumises and drinks less but more expensive wines’, Mr Clark said.

‘In the China market we have grown our value again and we are outperforming competitors, with the Global Trade Atlas figures showing that in the year ended February 2019, Australia had a 29 per cent share of the imported wine market – up from 26 per cent a year ago.

‘We are also seeing positive trends in the USA off-trade market where sales of Australian wine grew 3 per cent in value to US$521 million in the year ended December 2018. Even more encouraging is that Australian wine priced above US$15 per bottle has also grown by 3 per cent according to market monitor IRI Worldwide.’

Mr Clark said Australian wine supplies would remain tight in the short term with much of the 2018 vintage yet to hit the market and the expectation that 2019 vintage would be below the long-term average.

In the year ended March 2019, there was robust growth in most price segments (see Figure 1) with exports in higher priced categories recording the most significant growth, reflecting global premiumisation trends.

Read the Full Article
Coonawarra Cellar Door in the City – 2019