The Limestone Coast Protection Alliance has thanked the Member for Mt Gambier Troy Bell and the South Australian Government for voting today in support of turning the promised ten year moratorium on fracking in the Limestone Coast into law. 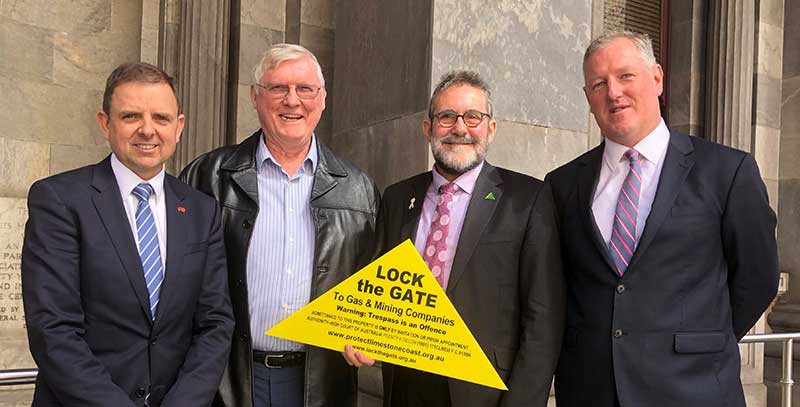 Troy Bell’s Petroleum and Geothermal Energy (Ban on Hydraulic Fracturing) Amendment Bill 2018 passed the South Australian House of Assembly today with the support of the Government.

The Bill was brought to parliament by Member for Mount Gambier, Troy Bell, who told parliament today that, “We are elected to this place to represent the people in our electorate.”

Limestone Coast Protection Alliance spokesperson Angus Ralton said, “We’re delighted that the Government has supported our community and our local member Troy Bell in backing the Bill to put the promised 10 year fracking ban into law, delivering on its election promise to the community of Mount Gambier and respecting the will of the people.

“It’s a huge relief for us to have certainty that the water resources and agricultural industries of the Limestone Coast will be safe from fracking for ten years.

“We want to thank our local member Troy Bell for his hard work and support of our community’s efforts to secure this certainty for our region and safeguard our water from fracking.

“We also want to especially thank local Liberal MP Nick McBride for backing this bill, supporting his community and leading on this issue inside the Liberal Party and Greens MLC Mark Parnell who has supported our efforts. We’re enormously grateful.

“This doesn’t solve all the issues we face however, and we will continue to work to have a similar ban placed on conventional gas fields which also threaten our region,” he said.

“However, it’s unfortunate that SA Labor voted against the Bill and is still ignoring the will of the community on this vital issue, despite a parliamentary inquiry concluding that the industry has no social licence in the south east and the electorate rejecting the Labor position at the election earlier this year. We’re calling on them to now urgently reconsider their support for fracking in the region.

“Around the country, Australian communities have told their political representatives they will not accept unconventional gas and fracking. The South Australian Government has responded to the public’s concern about this industry and delivered certainty for agricultural industries. We hope to see moves to outlaw fracking and unconventional gas continue to spread across the country.”

This article was originally posted in www.lockthegate.org.au

For more about gas mining in the Limestone Coast please go to www.protectlimestonecoast.org.au